Books Don't Matter, Authors Do: How to Attract the Media

Most writers want publicity for their books. Getting on TV is one of the dreams for accomplishing this, but many believe that being on a national TV show is beyond their reach. According to Emmy-nominated television producer and New York Times best-selling publisher, Jacquie Jordan, this is a totally realistic goal if the proper process is followed.

Jordan spoke at the May meeting of the Publishers Association of Los Angeles. She stated that one of the mistakes that writers make is waiting until their books are published before pursuing the media when the reality is that the producers need a six-month lead time.

Another mistake is pitching the book when they should be pitching themselves. Major publishers also make this mistake, she said, which leaves their authors out of the TV show promotional loop.


She made these 5 major points to cover for a quality pitch:


1.    What is your story?
TV producers want the author’s story. What is going on in the news that relates to that? The story-telling aspect should be multi-dimensional and everlasting and should fit several areas. Develop 5-6 speaking points. 2.    Develop a hook around your expertise
·         Current events
Perhaps your book has to do with a foreign country or a situation that is currently taking place. ·         Holidays
If you have written a book that has to do with relationships, think about pitching a topic for a show that will air around Valentine’s Day.
·         Anniversaries
A book with a military setting or about the military, for example, would be perfect for a topic around Veterans’ Day or Pearl Harbor Day. ·         Birthdays
Interesting tidbits about an historical figure would be a great pitch for a booking around this person’s birthday. ·         Celebrities
Maybe your book is about safety, and a recent celebrity suffered from a robbery or other crime. A pitch on safety tips to avoid these issues would work well. Perhaps your book is about the celebrity him- or herself. Pitch interesting facts that people don’t already know. 3.    Develop a solid platform.
This includes:

All three must have a uniform look. Include any media coverage of you or your work in all your social media and on your website. Jordan cited the example of one author who got 500 Twitter followers from one radio show.

One important point, she says, is that any material that is dated in content should be removed since relevancy is very important. 4.    Have a professional headshot taken
This should be used on all your media and in your media kit. 5.    Be prepared for several interview styles.
There are several types of interviews: ·         Sit-down Interview
This type is live or live-to-tape. No one will edit what you say. You must be on your toes! ·         Reality-Show Style
The interview is conducted in your home. ·         Demo Segment
Objects are used to illustrate points. ·         Satellite Interview
You can’t see the person or people who are interviewing you. You are looking at a wall. You have to be good at this so that it isn’t obvious. ·         Skype Style
This is usually done as a pre-interview. Most producers won’t put you on the air until they know you are able to deliver what you promised. People have lost interviews based on not looking at the camera but at themselves instead.
While self-published books are often difficult to get on TV because the works are not vetted, indie authors can get around this by promoting themselves as subject-matter experts with stories that are relevant to the show. Then they can mention the book. Jordan stated that authors should do three things when on TV:
1.    Come to the show hair-and-make-up- ready.

This not only saves time, but some shows don’t offer these services. The author should not be caught short.

2.    Bring two outfits
The outfit you have on may not be suitable for TV. Bring two changes of clothes.
3.    Hire a video monitoring service
The author must pay to get the show recorded so that he/she has it forever. Otherwise, the link that he/she receives for the show will be to the show site only.
In order to build momentum, Jordan advised authors to say yes to all media large or small. The content narrative has changed since the election. Producers know what answers they want. Authors should be chockful of ideas so the producers are impressed and will call you back. Radio producers will ask for 20 questions. TV producers at the national level do not usually ask for any. While it is possible for authors to get on national TV, it does take effort. The opportunity will not be handed to them. Jordan said they must follow the rule of 10%: 100 pitches for every 10 bookings. Authors should start with local markets and make a demo tape to use with larger ones. Authors should send their book with their pitch to producers via FedEx, then call to see if it was received. If not, they should send it again and keep sending it until it gets noticed. Be tenacious. Perseverance pays off! 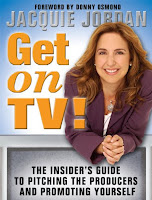